Deprecated: __autoload() is deprecated, use spl_autoload_register() instead in /home/rosetattoo2/public_html/wp-includes/compat.php on line 502
 3 Ways to Crush Your New Year’s Resolutions & Goals – The Free Woman Chronicles

This is the first New Year’s Eve I’ve looked forward to in a long time. While I’ve always enjoyed the New Year itself, generally the anticipation and expectation of what New Year’s Eve should be, has always left me disappointed. On the other hand, the idea of a fresh new year, new beginnings, and new opportunities has always excited me and motivated me.

But this year is different. I’m looking forward to both.

If you’re like me, you’ve seen how all the memes and social media influencers have been saying for weeks that if you haven’t started working on 2017 yet then you are already late. To that end, part of what has me in good spirits is that I’ve been spending the past month or so, and especially the past week, reflecting and working on getting clear about what I want to accomplish and manifest in 2017. I’m a list maker by nature, so I love making lists of goals and creating plans. And really that’s what I’m more excited about this year. Nothing on my list is something that I haven’t already been working on and created a plan for. Nothing on my list is based on things I can’t control. All of my goals are things that rely on me being consistent, taking action, being disciplined and staying true to myself.

One thing that always annoys me this time of year  are the people that try to shame those that create resolutions or goals. I’ll never understand people who make fun of those who want to do better or be better. I can half understand if what they’re getting at is people who make goals and resolutions that they keep up for only a month (if that). But for some people, this time of year symbolizes a new year and a new opportunity to start to do better or be better (although every day, regardless of the date, can be a new day to do that too). That’s a great thing.

So because I believe in setting goals and changing patterns, I thought I’d share 3 tips for resolution and goal-setting that I’ve learned along the way that I’ve kept in mind while I’ve made mine this year.

You can say you want to lose weight – but what are you going to do to make that happen. It’s more than just going to the gym, although if you haven’t been going that’s a definite start. Losing weight means eating better and getting exercise. I should know – the eating better part is my weakness while working out has never been a thing for me. Whatever your weaknesses are, you have to identify them and decide what you’re going to do combat and overcome them to make that resolution come true. That goes for all resolutions. If you want to start that business, what will be your first steps? You get the picture. Don’t just say words and think that will be enough. Plan for it. Make S.M.A.R.T. goals.

This is the one that has always gotten me stuck in the past. I can say that I want to grow my social media follower count or get another job, but really there are only so many things that I can do to make those things happen. I can promote myself and post more. I can apply to jobs, tweak my resume and cover letter, network, etc. But ultimately, those things all rely on other people. So while I believe in speaking things into existence, I know that in focusing on them I have to make my efforts and my work towards them be key. In the past whenever I’ve talked about things that I’ve had no control over, I’ve gotten down on myself when they haven’t come to fruition. So now I just work to do my best and be the best that I can be. You can’t control other people, but you can control yourself.  Some things aren’t meant to be and some things just take more time than others. As long as I give it my all and believe that what’s for me will come to be, then I’ve done enough. The same goes for you.

Believe in yourself. Believe that what you want to happen can come true. Believe in possibility. Believe in change. Just believe. Trying to work on something that you second-guess the entire way is a set up for either failure or a road made needlessly longer due to lack of faith and believe. I talk about the law of attraction all the time because it’s real. If you’re thinking negatively and talking about the futility of what you’re doing, you might as well not be doing anything at all. You have to believe AND put in the work. The two go hand in hand.

Well, that’s all I’ve got for now. I hope you all have a safe and awesome night and a happy, prosperous, productive, and blissful new year! Make those goals, set those resolutions, and be encouraged. Don’t let naysayers get you down. See you in 2017!!! 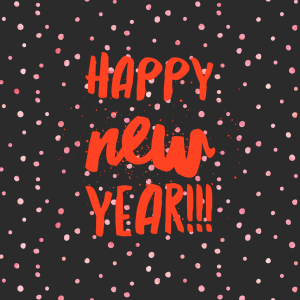