Deprecated: __autoload() is deprecated, use spl_autoload_register() instead in /home/rosetattoo2/public_html/wp-includes/compat.php on line 502
 LockDown Diaries Pt. 6: This Dating Thing – The Free Woman Chronicles 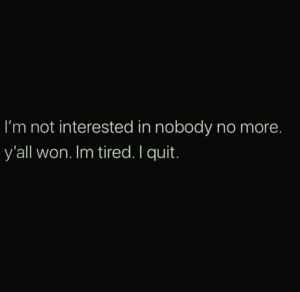 Dating during the quarantine is trash, just on a different day.

These days I don’t usually like to get too too personal and talk about my love life. But I have been seeing a lot of conversations recently about how, for better or worse, dating has been for singles during this time. When this first started going down, I was actually  on a dating site- trying to give these dating apps a chance for the fifty-eleventh time. In my experience, trying to find a decent guy on a dating app is actually harder than trying to meet someone in real life. (I know a lot of people that would say the opposite, but I stick by what I’ve said.) It’s just always been easier for me to meet people in person, which I prefer, because you can get a sense of their vibe in person. That isn’t to say that that makes it a sure thing. But it just seems that on dating sites a lot of guys either:  1. seem to let their creepy side show quicker or 2.reveal early that they’re not great at conversation. Nevertheless, I was back on the sites, trying to give it another try in an effort to cleanse my dating palatte, so to speak. So I signed up for an app with a simple goal, which was just to have fun dating again.

That was the end of February. By mid-March, the quarantine life was looming. The funny part is how things kicked up right while that was happening. Guys I just met on the app wanted to meet up immediately, despite me having known them all of a few minutes. Guys I knew in real life that had been inconsistent and I hadn’t heard from in forever, all of a sudden were inviting me over to “kick it.”

While my  mind was on some “ummm… you do realize that we’re supposed to be social distancing”,  these guys were clearly on some quest to get some before weeks of not having the opportunity to get any were upon them. How sweet.👎🏾

So after curving all of that, I laid low. I did manage to meet one or two guys on these sites, but all the high hopes – like the idea of having to do things virtually which might mean real conversations and actually getting to know someone –   soon dissipated. One by one conversations with each seemed to lead to them suggesting we meet up (to their credit, they started off good suggesting a park, but later that changed to the invite over – 🙄). I literally started questioning myself like “wait, am I crazy? Am I the only one actually socially distancing for real?” But even aside from that -I’m not going to someone’s house that I just met. ESPECIALLY in a pandemic.

On the one hand, I try not to take the levels of thirst here personally, because this is just a reflection of the same typical shit that I’ve seen before when trying to date online. This is the stuff I’ve encountered that’s led me to chuck the deuces to online dating every time in the past. This time I guess I just bought into the hype that being forced to do things virtually and be distant had the potential to make dating virtually better. In fact I’ve read online when the topic of online dating during the pandemic has come up that some people are having the complete opposite experiences. I’ve read about guys that are planning dope-ass virtual dates, having dance-offs on Zoom while at these IG Live dj sets, even guys sending Door Dash or Uber Eats to the girl so that he’s actually paid for the meal for these virtual dates.

And on the other end of the spectrum there are the experiences I’ve had. Night and day.

At any rate, I chose to close my dating app profile some weeks ago (I can’t keep track of any dates that I don’t have something specifically scheduled for) because I got to the point where I stopped checking it and just lost interest in it again. I’m open to whatever happens, but I’m really good right now.  Truthfully, with my focus being on those relationships I do have, as well as taking care of my own mental health, forcing small talk or dealing with the “do you want to come over shit” from strangers sounds annoying to me. Honestly, I just wish the guys that tried that would just be more original, or at least check their audience and find the girls that will go for that. But being that I know I’m looking for a unicorn ultimately, it’s easy for me to delete numbers and keep it moving when the mess shows itself. The same as I did before the quarantine.