I am not a morning person by any stretch of imagination.  The label “morning person” would never apply to me. But nevertheless,  Friday morning I found myself getting up early with the goal of heading downtown because I really wanted to see Black Lives Matter Plaza. 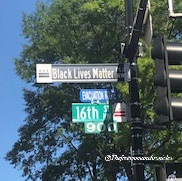 I wanted to see the site of all these protests. I wanted to see the actual street name change and see the street with the yellow lettering saying Black Lives Matter. Basically I just wanted to see the visual representation of  these words, that became the call for a movement years ago,  now having reaching the level of attntion (finally!) that they are displayed.

Now to be clear, I recognize that it is performative (as most people do, for those who want to dismiss people feeling excited about it).  But it’s still the symbolism in it that is still powerful to me. Because you still have people who are still getting offended by even saying Black Lives Matter. So the idea of it being proclaimed like this, by so many (even though it does feel weird having all these companies coming forward to issue stateme666nts every other day) feels surreal. The fact that it literally is on the street leading to the White House – I love it.  I still appreciate it because it’s happening.  These conversations as a result of this time are needed and it’s just, again, surreal because I have to be honest and confess that I’m not sure if I ever really thought that they would happen. At least not in my lifetime. 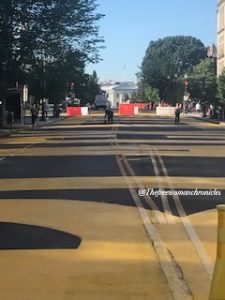 So I went and I started my day Friday with a good friend of mine. We did our social distance walk going through parts of the city that were the least populated (sidenote: it was amazing to see the city being slowed down as it was with hardly anyone out) and eventually we got there. I stood on the street trying to imagine what it was like for all the protestors, amidst this pandemic, out there.  I know the anger, the rage, and the energy they felt. Maybe even the fear with the military presence. But  there on that plaza, as I got to see everything with my own eyes, for the first time in a while, I felt something like hope.  Just seeing all these posters that people created and then the murals that were put up on the boarded-up windows – it was a feeling I wanted to hold onto.

These last weeks have been hard. Emotional. Heavy.  James Baldwin once said that “To be a Negro in this country and to be relatively conscious is to be in a rage almost all the time. ”The emotions that I went through: it’s like the culmination of years of all that rage, anger, and sadness just came out. It’s like what so many have said, the death of George Floyd was a tipping point. And the tears came in a way they hadn’t before. Everything was triggering.

So yeah, even though I’m not a morning person, I would get up early every morning just to be able to see that and feel all that again. 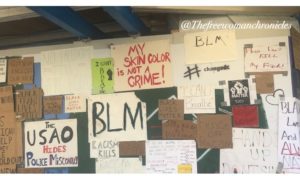 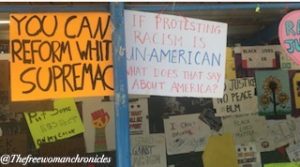 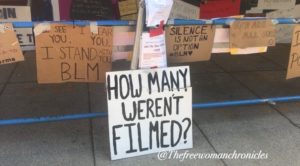