Deprecated: __autoload() is deprecated, use spl_autoload_register() instead in /home/rosetattoo2/public_html/wp-includes/compat.php on line 502
 The Beauty in Letting Go – The Free Woman Chronicles

It is t-minus 2 days until my birthday. Man, there is something about getting another year older that makes you reflect on your life and everyone (and everything) in it.

Over the weekend I found myself thinking about a random text conversation with someone that I had that somehow got onto the subject of respectability politics. Well, it actually it started off being about the Million Man March anniversary rally/Justice or Else march, which led to me citing how I heard that one thing said at said march was the sentiment about how women should dress and other comments (sexist comments to be exact). This person agreed with the sentiment and I of course ended up looking at my phone with this going through my head:

Anyway, to say it bothered me would be mild. I know that part of that is because I hate respectability politics and I am pretty passionate about my beliefs as it relates to women being able to embrace their sexuality and be who they want to be. But the other part is because I actually cared about this person and their thoughts, despite the fact that this season seems to be over. As a result I found myself arguing with the educator in me, that wanted to check challenge him on this thoughts ,while also trying to figure why I was even asserting energy toward the effort in the first place. In the end, I realized that the problem was not even so much how this person thought about this subject, but moreso that it was yet another reason to add to something that I’ve known but have been in denial about: that’s it time for me to let go. (Now to be clear, this conversation wasn’t like a huge epiphany that made me ready to cut all ties with this person. There are plenty of people I know and love who have political views or ideas that I consider ass-backward. But with this person, this was more like a final nail in a coffin that by all accounts should have been shut.)

With my birthday being literally around the corner I can’t help but think about how age has brought wisdom in some respects, but hasn’t in others. While my discernment has grown, my patience and ability to put up with my time being wasted has decreased. As a result I’ve found myself letting go of relationships/acquaintanceships in my life that have been toxic, decaying, and not genuine. And while I usually take a quarterly inventory of my phone to symbolically purge people in those categories, there are always some people who I’ve not been able to let go of for whatever reason. There was a time when I was a glutton for punishment and this would have made sense. However knowing how awesome I am as a person and all that I have to offer (sidenote: This is not conceit or arrogance. Everyone should think of themselves like this) this lack of ability to let go doesn’t make sense.

But what I have to remind myself of is this: letting go of a relationship that has run its course –whether it’s a friendship, a relationship with a family member, a romantic situation, or even a relationship with a position or organization that you were a part of – does not mean that you automatically don’t care or have anger. The end of something is part of the natural course of things. That saying that “all good things come to an end” didn’t come from nowhere. Sometimes that end is just a change in status. But sometimes that end is really a goodbye. And that’s okay. As I’m writing this I’m preaching it to myself. You can be sad, or angry at first. That’s not unnatural. In the end though, I think it’s worth appreciating that you had this relationship (if it was a positive one, had positive aspects to it at some point, or was a learning experience) in the first place. That alone can be something to help you see this end as a good thing.

Taking it back to me…I am admittedly a little sad. As I told my sister, I hate feeling things, especially bad things, because it seems like in this world today having feelings shows vulnerability which people take for weakness (that’s a whole other post for another day). But I also know that at this stage in my life, I only want genuine people in my life – and I don’t make apologies about that. I am blessed to have relationships with good people, people that regardless of whether we talk all the time or don’t, I know care about me. My belief in loyalty is too fierce to just give away or waste on just anyone, so I know I’m blessed to have the relationships that I have. Additionally, I am always open to meeting new people and making new friends and acquaintances. But it’s true that some people come into your life for a reason, a season, or a lifetime, which therefore means that not every relationship in your life is meant to be permanent. It can be hard for me to let go, but when I know that it’s time I do. There’s nothing worse than trying to hold onto something that is dead. But on the flip side, it can be freeing to take stock of what you had, what you learned, and the beauty of loving yourself enough to set free what has come to an end. 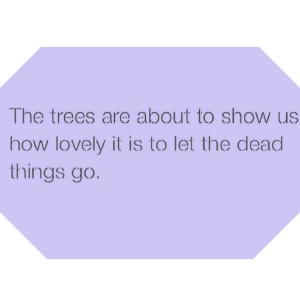